A technically sophisticated threat actor known as SeaFlower has been targeting Android and iOS users as part of an extensive campaign that mimics official cryptocurrency wallet websites intending to distribute backdoored apps that drain victims’ funds.

Said to be first discovered in March 2022, the cluster of activity “hint[s] to a strong relationship with a Chinese-speaking entity yet to be uncovered,” based on the macOS usernames, source code comments in the backdoor code, and its abuse of Alibaba’s Content Delivery Network (CDN).

“As of today, the main current objective of SeaFlower is to modify Web3 wallets with backdoor code that ultimately exfiltrates the seed phrase,” Confiant’s Taha Karim said in a technical deep-dive of the campaign.

SeaFlower’s modus operandi involves setting up cloned websites that act as a conduit to download trojanized versions of the wallet apps that are virtually unchanged from their original counterparts except for the addition of new code designed to exfiltrate the seed phrase to a remote domain. 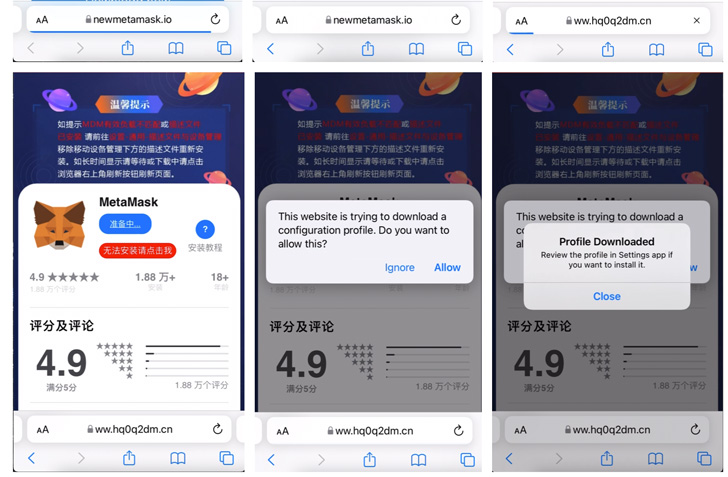 The malicious activity is also engineered to target iOS users by means of provisioning profiles that enable the apps to be sideloaded onto the devices.

As for how users stumble upon these websites offering fraudulent wallets, the attack leverages SEO poisoning techniques on Chinese search engines like Baidu and Sogou so that searches for terms such as “download MetaMask iOS” are rigged to surface the drive-by download pages on top of the search results page.

If anything, the disclosure once again highlights how threat actors are increasingly setting their sights on popular Web3 platforms in an attempt to plunder sensitive data and deceptively transfer virtual funds.